MPO fibre patch cord is a high-density fibre optic transmission jumper which consists of MPO connectors and fibre cables. The MPO connector is built on the MT-style ferrule, designed by NTT. MPO connectors can provide quick and reliable high-performance interconnections up to 4, 12, 24 or more and are usually used with ribbon fibre cables.

MPO connectors contains several parts such as boot, coupling/housing assembly, ferrule, guide pins, and so on. Because of difference pins types, the MPO connector can be either male or female. The male connector has metal guide pins to ensure fibre alignment when mating while female connector has no pins. These pins make sure that the connector fronts are precisely aligned on contact and that the fibres' end-faces aren’t offset.

MTP/MPO technology, which is of high density, flexibility and reliability with scalable, upgradeable properties, is one of the contributors that lead the migration to 40/100GbE. However, the network designers face another challenge which is how to assure the proper polarity of these array connections using multi-fibre MTP/MPO components from end-to-end. Correct polarity across a fibre network ensures that a transmit signal from any type of active equipment will be directed to receive port of a second piece of active equipment – and vice versa. To ensure the MTP/MPO systems to work with correct polarity, Polarity defines direction of flow, such as the direction of a magnetic field or an electrical current. In fibre optics, it's the A-B-C’s of Fibre Polarity. To properly send data via light signals, a fibre optic link’s transmit signal (Tx) at one end of the cable must match the corresponding receiver (Rx) at the other end.

Keeping the right polarity is essential to the network. A transmit signal from any type of active equipment will be directed to the receive port of a second piece of active equipment and vice versa. Polarity is the term used in the TIA-568 standard to explain how to make sure each transmitter is correctly connected to a receiver on the other end of a multi-fibre cable. Once the component is connected to the wrong polarity, the transmission process will be unable to go on.

The three methods for proper polarity defined by TIA 568 standard are named as Method A, Method B and Method C. To match these standards, three type of MPO truck cables with different structures named Type A, Type B and Type C are being used for the three different connectivity methods respectively.

Type B: Type B cable (reversed cable) uses key up connector on both ends of the cable. This type of array mating results in an inversion, which means the fibre positions are reversed at each end. The fibre at P1 at one end is mated with fibre at P12 at the opposing end. 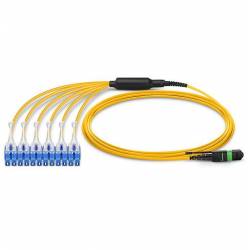 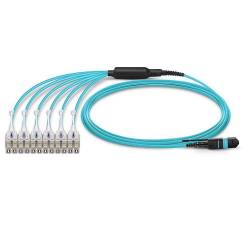 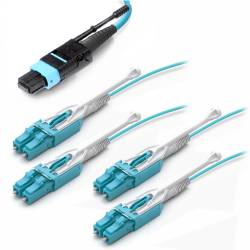 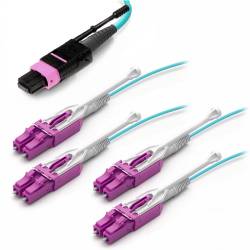