Multimode Cable and Its Type

Multimode fiber optic cables can be divided into OM1, OM2, OM3, and OM4 based on the types of multimode fiber. The letters "OM" stands for optical multimode. OM1 and OM2 belong to traditional multimode fiber patch cable, while OM3 and OM4 belong to the new generation fiber patch cable which provides sufficient bandwidth to support 10 Gigabit Ethernet up to 300 meters. The connector types include LC, FC, SC, ST, MU, E2000, MPO and so on. Different type of connector is available to different equipment and fiber optic cable.

By the materials of optic fiber cable jackets, multimode fiber patch cord can be divided into four different types, PVC, LSZH, plenum, and armored multimode patch cable. PVC is non-flame retardant, while the LSZH is flame retardant and low smoke zero halogen. Plenum is compartment or chamber to which one or more air ducts are connected and forms part of the air distribution system. Because plenum cables are routed through air circulation spaces, which contain very few fire barriers, they need to be coated in flame-retardant, low smoke materials. Armored fiber patch cable use rugged shell with aluminum armor and Kevlar inside the jacket, and it is 10 times stronger than regular fiber patch cable.

Both OM1 and OM2 cables are used in Short-haul networks, Local Area Networks and Private Networks and work with LED transmitters that send hundreds of light modes down the fiber. But they will not support the future’s higher speed demands.

OM3: This type of cables has aqua jackets and a 50 µm core. They can run 10 Gigabit Ethernet applications at 300

meters, though it has been improved to work even with 40 and 100 Gigabit Ethernet applications if using an MPO connector, the first one is the most used. They use fewer light modes, which enables higher speeds. And have 1.5 dB connector loss at all speeds.

Both OM3 and OM4 are optimized to work with laser based equipment and they differ from standard multimode cables because they have graded refractive index, which means the refractive index decreases towards the outer cladding, increasing speeds and ensuring data transmission over great distances.

Multimode fiber features carrying multiple signals at the same time in the same line. Most importantly, the total power inside the signals carries almost no loss. Therefore, the network user can send more than one packet in the cable at the same time, and all information will be delivered to their destination without any interference and keep unchanged.

Multimode fiber can support many data transfer protocol, including Ethernet, Infiniband, and Internet protocols. Therefore, one can use the cable as the backbone of a series of high value applications.

Multi-mode fiber patch cables are used to connect high speed and legacy networks like Gigabit Ethernet, Fast Ethernet, and Ethernet. OM1 and OM2 cables are commonly used in premises applications supporting Ethernet rates of 10Mbps to 1Gbps, which are not suitable though for today's higher-speed networks. OM3 and OM4 are best multimode options of today. For prevailing 10Gbps transmission speeds, OM3 is generally suitable for distance up to 300 meters, and OM4 is suitable for distance up to 550 meters. 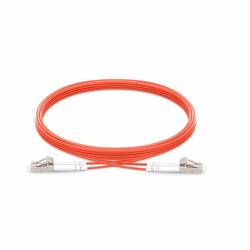 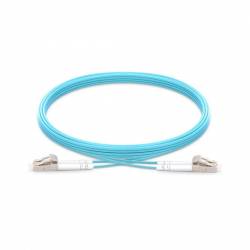 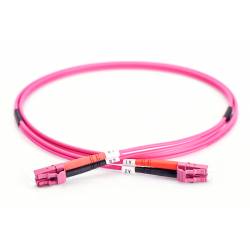 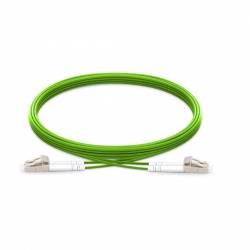